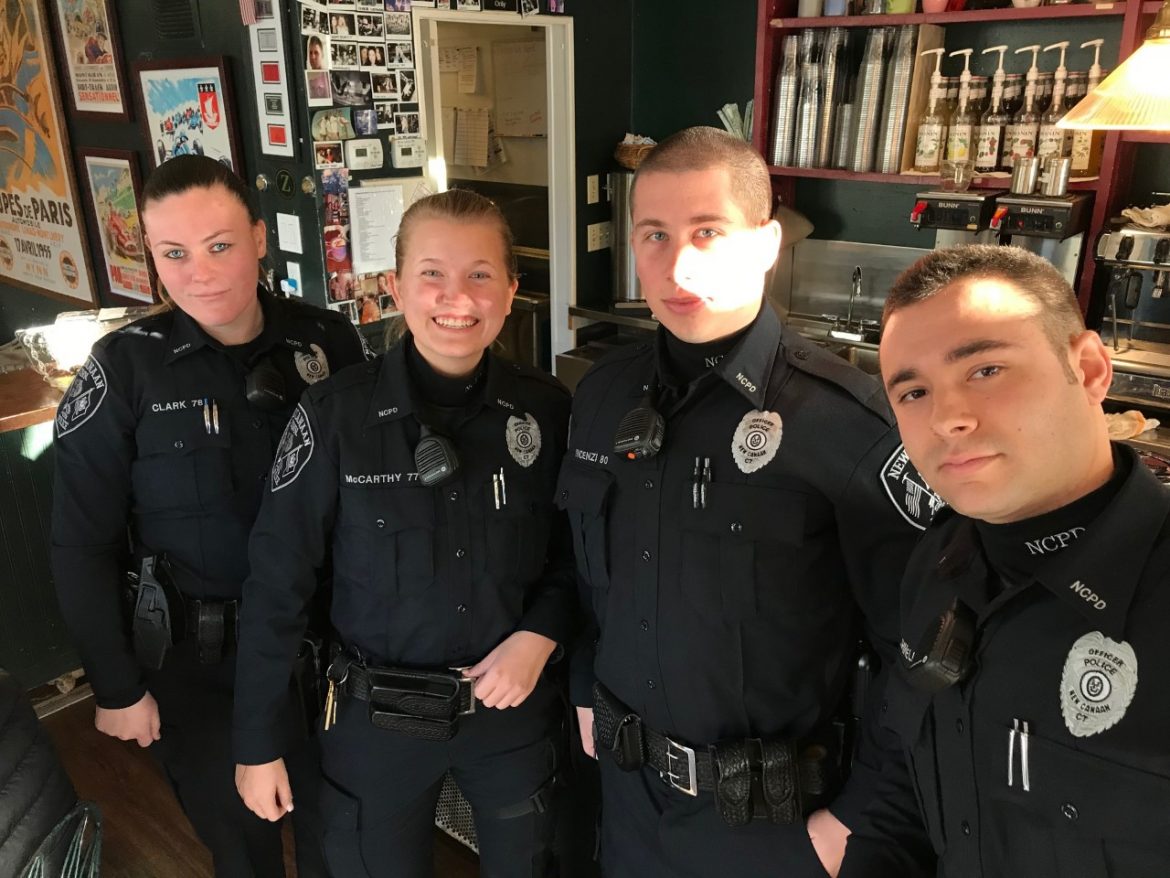 Dozens of residents popped into a popular coffee shop downtown Friday to meet the four newest members of the New Canaan Police Department.

During a two-hour “Coffee With a Cop” gathering at Zumbach’s, Officers Emily Clark, Erin McCarthy, Giancarlo Vincenzi and Joe Schinella met and fielded questions from locals.

Sworn in last summer and now graduated from the State of Connecticut Police Academy, the officers mingled with residents for one of the first times since starting field training earlier in the week.

“We serve the community,” DiFederico said as the always-busy Zumbach’s filled with patrons. “We have to meet the community and get to know them. And they have to get to know us. So it’s absolutely vital to interact and talk with our community.”

Asked for his first impressions of the town, Schinella said, “It’s a beautiful community.”

“Everybody is very friendly,” said Schinella, a Stamford High School graduate who earned a bachelor’s degree in psychology from Fairfield University. “I’m just proud to be here and be able to help. And I hope I do the best I can to serve the community to the best of my ability.”

Clark, who graduated from Newtown High School and earned a bachelor’s degree in criminal justice from Post University, said she’s been “learning a lot” since hitting the ground in New Canaan.

“Right now it’s orientation week so I’m getting to know the community and it’s great,” she said.

McCarthy, a Trumbull High School who earned a bachelor’s degree in equine business management from Delaware Valley University and whose father is a police officer, said she’s “excited to get to know everyone, learn my way around and serve the community.”

Vincenzi said gatherings such as Coffee With a Cop rank are “one of the best things” about working here.

“In New Canaan, the community is so important to the Police Department and vice versa, and I know they have a great relationship,” said Vincenzi, a Trumbull High School graduate who earned a bachelor’s degree in criminal justice from Central Connecticut State University. “So getting to know the people in town and doing more things like this, becoming acclimated to the town and doing things like that is really what’s got me excited.”

The newly made police, all in their early- to mid-20s, likely will be back to Zumbach’s, a popular spot among fellow officers.

DiFederico said with a smile, “I think this is our western precinct over here.”

“Any time you can get a good conversation over a good cup of coffee, good things can happen,” he said.