Justice joe: Residents share a cup of coffee with cops 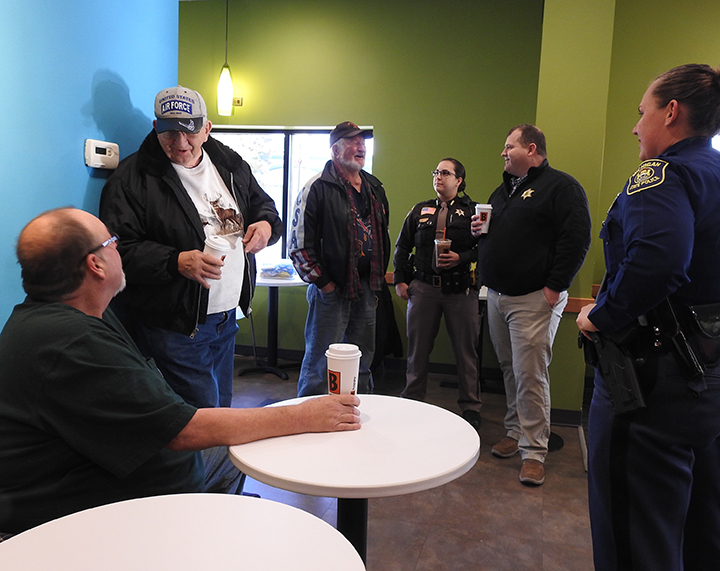 A mocha caramel latte and a conversation with a cop can make a nice start to a day.

Coffee with a Cop, a national initiative designed to bring police and the communities they serve together, is an opportunity for residents to spend time with officers in a relaxed atmosphere.

Coffee cup in hand, police can learn about the people they serve and gain a new perspective on what topics are most pressing in residents’ minds.

At Thursday’s Coffee with a Cop event, held at the Biggby Coffee location on Chisholm Street in Alpena, uniformed representatives of the Alpena County Sheriff’s Office, Alpena City Police, and the Michigan State Police-Alpena Post met with residents.

While waiting for her coffee order, a resident shared her worries about drug use among today’s young people.

“Family is everything,” Deputy Christina Bednarski told her, the two sharing stories and laughs about Bednarski’s work as the school liaison officer at Alpena’s Thunder Bay Junior High School.

When people see officers on patrol or at a traffic stop, they may not feel comfortable asking questions, MSP Community Service Trooper Ashley Simpson said, but they will come to events like Coffee with a Cop, ready to talk and ask questions.

Simpson has been stopped in the grocery store by people who want to ask her questions, which, she said, is a good thing.

Face-to-face interaction with law enforcement helps a community bond with those serving it, according to Mary Delling, official “director of fun” at Biggby, who invited local officers to hold their most recent cop-coffee klatch at her establishment.

“That way, we know what’s going on,” Delling said. “You can feel comfortable going up to them if you have an issue.”

A number of local officers are regulars at the shop, familiar faces with whom Delling can have friendly chats. She used to babysit for Simpson, she said, and her kids love Bednarski, who brings comfort with police presence into local schools.

“I like the way they get involved with the community,” Delling said. “Those connections go a long way.”

Informal conversations give law enforcement an avenue to understand the concerns of the community, said Eric Smith, undersheriff at the Alpena County Sheriff’s Office.

“People can ask questions, get a response, and keep us on our toes,” Smith said.

Sometimes something seemingly minute and not on law enforcement’s radar will be really important to the public, Smith said.

“I love stuff like this,” Alpena resident Bob Reid said, watching people in and out of uniform mingle and chat. “These guys are always running around like crazy, doing their job. It’s nice for people to actually get to see the personalities, the people behind the uniform. It’s pretty cool.”