Connecting with the community 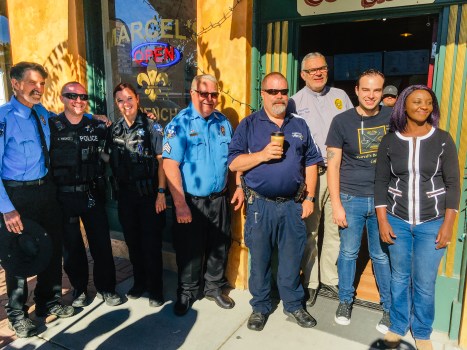 “Coffee with a Cop” first began in Hawthorne, California in 2011 as a way for their officers to engage with the community in an informal way. It has since spread nationwide, including Lake County. According to police Chief Brad Rasmussen, this is year is the fifth annual “Coffee with a Cop,” which took place on Saturday morning at Marcel’s French Bakery and Cafe on Main Street.

Pascal Hue, owner of the cafe that has been in Lakeport for one and a half years, said he knows the police chief and he talked to him about “Coffee with a Cop” and they both made it happen.

Hue addressed the possibility of a power cut to Marcel’s French Bakery as a result of PG&E’s announced safety power shut offs. “Not having a generator,” he said, ”we’d probably have to close up. I’d feel bad, mostly for my employees.” At 21 years old, Hue took over the bakery in Clear Lake Oaks and the Lakeport bakery when his father became ill. Hue loves when the officers come in for coffee, “We even give them a discount as appreciation for their service.”

The small bakery was crowded with cops and civilians alike, in line for coffee and some of the delicious-looking baked goods on display.

Little 7-year-old Rylie Armstrong enjoyed two pieces of pastry and a chat with Rasmussen. It was her first time at “Coffee with a Cop.” As she munched on her fruit tart, she said, “I know some of them [the officers]. I don’t know all their names, except Gavin, my mom’s boss.” Her mother, Nikki Morlan, is a dispatch supervisor of Lake County Sheriff and Lakeport P.D. They stopped for a breakfast snack and chat on their way to the Steele Wines farmer’s market.

Loiwe Bramble, originally from Zambia, who works at Public Works learned about the event on Facebook and came in early for her coffee and to talk to some of the police she knows.

People on the sidewalk put on sunglasses as protection from the bright sunlight. Some spoke to Rasmussen about tattoos and beards on cops. Most agreed that the required sleeves that cover tattoos were a good idea. Sandra Campos of the Lakeport Main Street Association, said, “As long as a beard isn’t too long, long enough for someone to grab, they’d be okay..” Rasmussen, stoking his own short beard, said, “Like mine.”

Campos spoke about the coffee with cops, “I love it. I always come. It’s where people can voice their concerns and ask questions and get to know who’s protecting the community.”

Many citizens posed for pictures with the officers.

Kelly and Jess from Lower Lake were on their way to Mendocino to go fishing in the ocean and do a bit of surfing. “We stopped for a coffee break,” said Jess, who didn’t want to share his last name. “Didn’t knowing we were walking into a coffee shop full of cops,” he said laughing. “So far so good.”

Chatty Steve Cohn from Morgan Hill, whose son, Danny Christian Falcao, is on this season’s “The Voice,” stood out on the sidewalk sipping his coffee and talking to many gathered there in the warm sun, even showing pictures of his son.

Greg Scott, a volunteer sergeant with the Lakeport PD for 10 years and Jim Mortensen, who lost his house in the Valley Fire, sat inside at a small table and told war stories about the days they both worked for CalFire. Scott said about having coffee with a cop, “I believe it gives a great opportunity for open communication between the citizens and the law enforcement agencies and allows questions to be asked and answered from law enforcement folks. Also face-to-face communication and getting to meet people brings us closer together.”

Mortensen talked about how the fires now are more extreme than they were when he worked for CalFire 20 years ago, “Mainly because of drought and how more buildings are in isolated areas with difficult access to said structures.”

Five of Rasmussen’s officers came to the event. Rasmussen said that most questions he received that morning were about power shutoffs and neighborhood watch. His short answer on power shutoffs was, “We want the public to be prepared to live without power for a few days.” Regarding neighborhood watch, “We ask people get involved with the police to solve problems and prevent crime.”

Patrolman and Community Outreach officer Joe Medici has been with Lakeport P.D. for three years. He participated in the “Cops and Doughnuts” in February and he voiced the same opinion that all the officers at Coffee with a Cop had, “Honestly it’s a great community outreach. It just helps us relate and humanizes the badges, talk to people and see what’s going on within our community and the law enforcement.” Wearing two black bands over his badge in honor of the latest officers who died while on duty, he said, “We’re all a big family. We’re here to serve and protect and help everybody out and make sure our community is safe. At the end of the day that’s what our job is.”