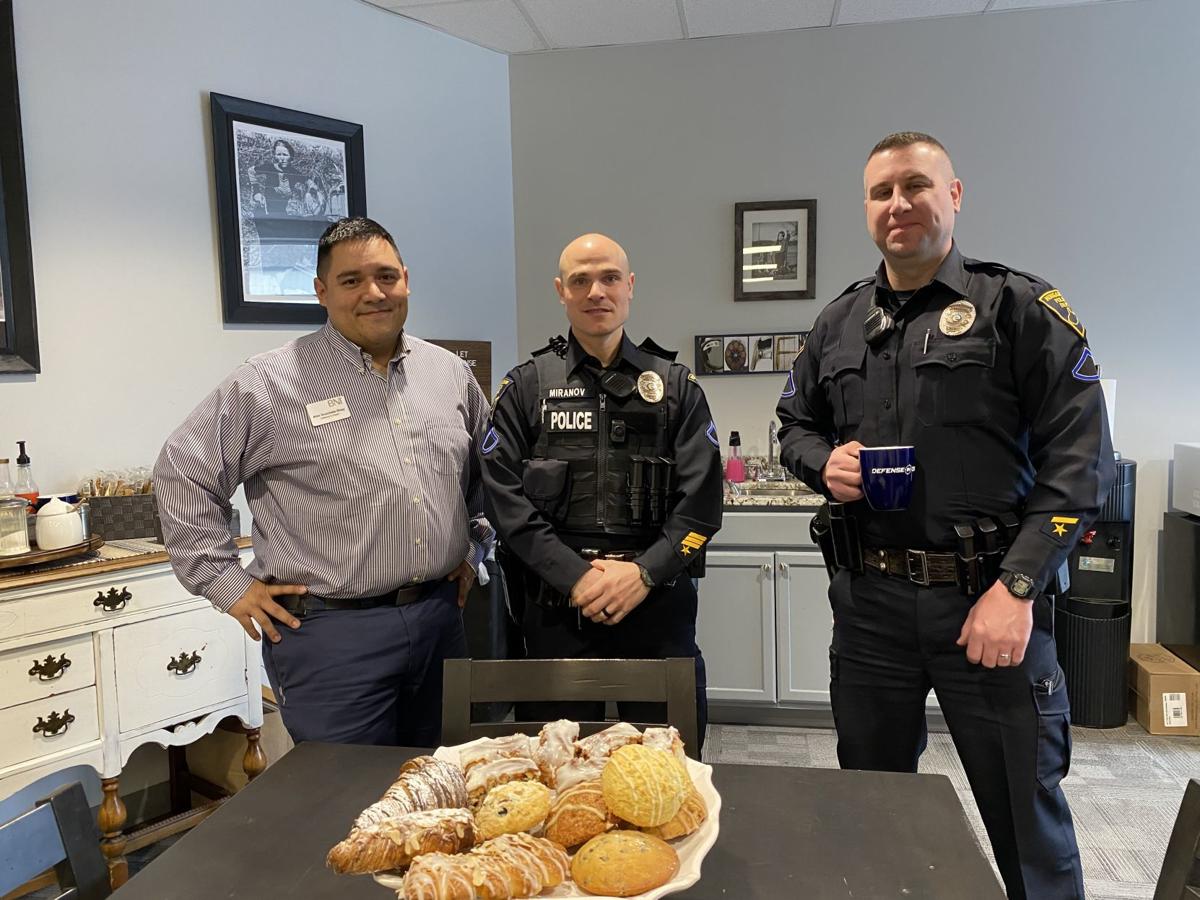 People often associate police officers with their badges, cruisers, lights and guns without making much connection to the individuals behind those fixtures, but Thursday morning’s Coffee with a Cop at Defense In Depth aimed to change that.

The event is part of a program that start nationally nearly 10 years ago to facilitate open communication between law enforcement officers and community members.

“Coffee with a Cop is a chance for direct information flow between us and the public,” said Morgantown Chief of Police Ed Preston in a previous release. “It’s a great opportunity for us to get out and interact with the public, and for the public to ask questions or present issues while in a non-enforcement capacity. We look forward to seeing everyone.”

Morgantown Police Department officers have regularly participated in the events around the community for a few years, including at several McDonald’s. Thursday’s Coffee with a Cop was the first event at Defense In Depth, which is an indoor shooting range located at 1389 Earl L Core Road in the Sabraton area of Morgantown, according to Defense In Depth Event Coordinator Alex Shay.

“We go above and beyond to be the best community member we can,” he said. “We just want the community to have an opportunity to communicate with [the police], get their perspective and just be together.”

Officers R.D. Miranov and Bernie Molek were on hand at Defense In Depth Thursday morning in the membership lounge, which was full of fresh coffee, pastries and places for folks to grab a seat and have a conversation.

“It’s really about I think getting out in the community and getting to be around us and see us,” Molek said.

Making sure that residents are comfortable with the city’s police force was a key focus of the Coffee with a Cop event for Miranov, who said that speaking with the community in a controlled, casual environment can change how communication happens in the future.

“So many people out there think it’s hard to approach an officer and talk to them,” Miranov said, adding that being out in the public and being a part of the community. “I think it just breaks that barrier down. …This is one way to relate to the police department.”

Thursday was Miranov’s first Coffee with a Cop, and he was most looking forward to just talking to people in an open environment.

“I want people to know that they can come talk to us. We’re not robots, we’re not programmed to be and act a certain way,” he said. “We’re just like anybody else — we just have a job to do.”

For Defense In Depth, which boasts an indoor shooting range, shop, classroom space, self-defense lesson studio and virtual reality simulator, the event offered a chance to show what they’re all about to the public, as well as continued to strengthen bonds with the community, according to Shay.

“Anytime you have any kind of relationship, you want to speak to someone that you know,” Shay said of people putting names and faces to the officers on the city’s police force. “If I do need your help, I know who you are.”

In times with issues such as police brutality and violence in the news cycle, Shay said he believes getting down to interpersonal communication can do a lot on how the public perceives police and vice versa.

“Really it just comes down to compassion and understanding. I know we live in turbulent times and I know that people don’t always understand what police are thinking, or what they do or who they are, so we want to add humanity back to that equation,” Shay said, adding that Morgantown’s police force is in his opinion on the best in the state. “We want the police to engage with people. … We also want people to understand that cops are just people.”

Defense In Depth is aiming to get involved in the community and create an environment that’s comfortable for all residents who want to learn about self-defense and preservation in varying levels of interest, including men and women facing all sorts of circumstances, according to Shay.

“We do a lot with [Rape and Domestic Violence Information Center], we do a lot with Acension Recovery, we do a lot to clean the rail trail and we work with the police departments for a number of things,” Shay said, adding that the accessibility of the range and offerings to the community are key points for Defense In Depth. “We wanted to create a place where you can have it all.”

The officers were available from 9 a.m. to 1 p.m., and while they wanted the community to walk away with a greater sense of comfort and understanding, the event is also a benefit for the cops involved.

“It’s good for us to talk to people to when it’s not call-related,” Molek said. “We’re always dealing with people at … might be one of their worst moments. … It can keep us in a good balance when you talk to people that aren’t necessarily needing you for a call to service.”