Community comes out in force to honor police 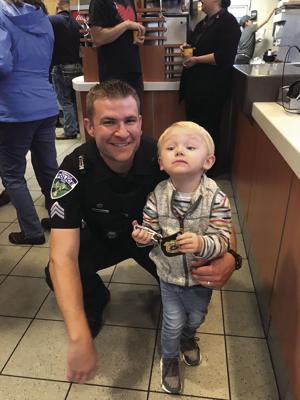 The lobby of McDonald’s at 600 Sidney Baker was filled for two solid hours Wednesday, Nov. 20, as area citizens gathered to greet and interact with Kerrville Police Department officers for the planned “Coffee with a Cop” event.

Hosted by new local McDonald’s franchise owners Kevin and Liz Mazzu, in partnership with KPD, guests were invited to a free cup of coffee and conversation with local police.

“We were really pleased with the response from the community,” KPD Chief David Knight said. “We had a lot of citizens show up, but what’s more important was their effort to initiate conversation and dialogue with us and that was the goal.”

Knight said he and his staff had been planning outreach efforts when he was approached by the Mazzus.

“The Mazzus are supporters of law enforcement and this is an event that they’ve done before, so they were willing to put their resources behind it to make it happen,” Knight said. “We are grateful, because it gives us an opportunity to hear from the citizens what it means to them to live in a safe community and also learn how want to be served and protected.”

Last week’s “Coffee with a Cop” had been rescheduled, due to an uncontrollable event at the restaurant, but yet the citizens still came out in force.

“Event though we had to postpone it from our previously scheduled date, they still came,” Knight said. “It was gratifying to see the response from the community. We are already looking forward to the next one.”

Kevin Mazzu has committed to hosting “Coffee with a Cop” quarterly.

“My wife and I are what is termed as ‘owner/operators,’ which means we own the restaurants, but we are also involved in the day-to-day operations as well,” Kevin said. “McDonald’s and we are strong believers in giving back to the community in which we operate and this was one way we could do that.”

Kevin said law enforcement is important in every community, so choosing to support the Kerrville Police Department made much sense.

“I reached out to Chief Knight a few months ago and he liked the idea of it,” Kevin said. “We’re going to be doing this on a quarterly basis and our citizens can come enjoy a nice cup of coffee and a relaxed conversation with members of our law enforcement.”

While the “Coffee with a Cop” event had been planned for the previous week, it was not lost on Kevin that the event fell less than 24 hours after police completed a 15-hour standoff with a murder suspect.

“It’s fortuitous that it happened that way, but it is a reminder to our citizens of what the job of these men and women entails,” Kevin said.

Planning is already under way for the next event and once the details are finalized, the public will once again be invited to interact with members of the Kerrville Police Department.

“This will not be a one-and-done event,” Knight said. “We plan on sustaining the effort and building on it. Our ultimate goal is to continue the dialogue with our citizens and continue to learn their expectations for us and help them understand our jobs better. I believe it will only strengthen our relationship with the community.”

Cali Bock Fondren grew up in Kerrville and now resides in Houston, but returns often to visit her parents and siblings.

When she learned that McDonald’s was hosting the event, she felt compelled to bring her 3-year-old son and show support for KPD officers.

“I wanted to show my support for our officers,” Fondren said. “I think it is important to let them know they are valued by citizens, especially in today’s political climate. I brought my son with me today, because I want him to grow up to respect and appreciate law enforcement.”

Fondren said having the one-on-one interaction with local police officers is priceless and she looks forward to the next event.